The ESC Congress returns to London in 2021 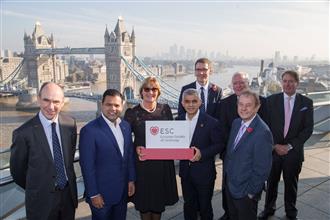 The European Society of Cardiology (ESC) has announced that ESC Congress, the world's biggest gathering of heart specialists, will return to London in 2021.The ESC decision is a huge vote of confidence in London's position as meeting destination, as well as a leading centre for medical research. When the ESC last came to London in 2015, it generated £100m of economic benefit for the city, attracting more than 32,700 delegates from 140 countries. The European Society of Cardiology is committed to expanding the boundaries of cardiovascular medicine. The decision to stage the congress in London comes as the Mayor, Sadiq Khan, adopted the Healthy Streets Approach, prioritising health in transport and planning decisions, and investing £2.1 billion into street schemes that promote walking, cycling and public transport over private car use. The announcement was made during a meeting between Isabel Bardinet, ESC's Chief Executive Officer, and the Mayor of London, Sadiq Khan, at City Hall. Sadiq Khan said: "I'm delighted that London will be hosting so many of the world's top heart disease specialists from around the world, and as Mayor I'm proud that we're investing record amounts in increasing physical activity, and preventing heart disease among Londoners." Isabel Bardinet, ESC's Chief Executive Officer, said: "We are proud to join forces with such a dynamic, forward thinking city." The Mayor's draft Transport Strategy sets out ambitious plans to increase physical activity and improve the health of Londoners over the coming decades. It includes increasing the proportion of people walking, cycling and taking public transport to 80 per cent of journeys by 2041, compared to 64 per cent now.