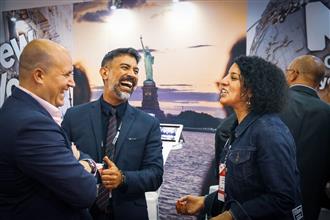 IBTM Americas 2018, was hailed a great success by exhibitors and Hosted Buyers with over 12,500 pre-planned meetings during the two-day event, which took place from 5 - 6 September in Mexico City. Over 400 exhibitors took stands at the show, representing a 50 per cent increase on last year, with international exhibitors making up 54 per cent of the total. A group of over 785 Hosted Buyers attended from across North America, Latin America and Europe, 45 per cent up on last year. Hosted Buyers included Nokia, Interamerican Development Bank and AXA Insurance. Commenting on the event, David Hidalgo, Show Director, IBTM Americas, said: “We’re delighted with our first successful edition of IBTM Americas with its new, broader geographic remit. We welcomed a large number of high quality Hosted Buyers and Exhibitors, who we know from our preliminary feedback all enjoyed productive business meetings. This year’s comprehensive Knowledge Program, set in an open room with personal audio, was also well received by attendees, who appreciated the relevant and engaging content.” www.ibtmamericas.com