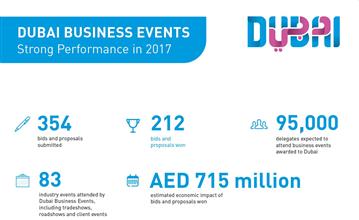 Dubai Business Events (DBE) secured a total of 212 bids throughout 2017, representing its most successful year to date, the city’s official convention bureau announced. As a result of secured bids and proposals in 2017, Dubai is set to welcome an additional 95,000 delegates, delivering an economic impact of approximately AED 715 million. Dubai submitted a total of 354 bids throughout 2017, and among the wins were those for bids submitted before 2017. At the end of the year, 104 bid submissions were still awaiting decision. The bids and proposals secured in 2017 mark an increase of 64% over 2016 when a total of 129 bids were won, further cementing the Emirate’s leading position as a global business events destination. This success also comes as DBE celebrates its 15th anniversary as Dubai’s official convention bureau. Since its establishment in 2003, DBE has been pivotal in shaping the city’s world-class business events offering. Issam Kazim, Chief Executive Officer of Dubai Corporation for Tourism and Commerce Marketing, said: “The exponential increase in bids won in 2017 is a direct reflection of Dubai’s rapid growth as a leading business hub. 2017’s success in attracting international business events builds on the steady growth the city has experienced, establishing Dubai as a destination of choice for business events from around the globe. These successes have been made possible due to the close collaboration with our stakeholders and partners, who play a crucial role in realising Dubai’s strategic objectives.”
www.visitdubai.com
tags:
Dubai Dubai’s