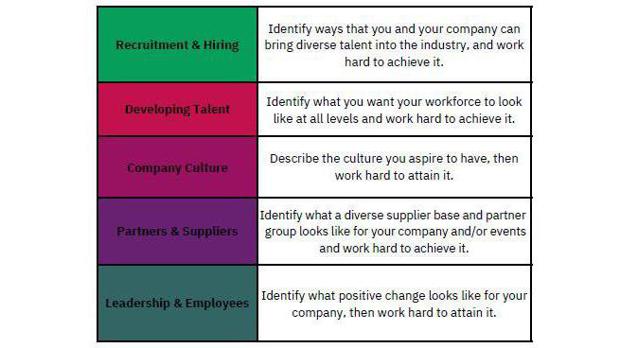 
The pillars provide a framework for the industry to guide organisations in implementing the right level of diversity, equity and inclusion (DEI) in their business, the associations state.
„AEO, AEV and ESSA members set out to make impactful change.“
Rachel Parker, director of EIA
This should be reached by focusing on the five categories 1) recruitment and hiring, 2) developing talent, 3) company culture, 4) partners and suppliers, and 5) leadership and employees. The pillars will be supported by a series of video shorts, which cite examples of how to use them to ensure they're as accessible as possible.

Rachel Parker, director of EIA says: "Following the launch of the cross-association diversity and inclusion working group in 2020, AEO, AEV and ESSA members set out to make impactful change. Together, we launched the D&I hub to raise awareness of the experiences and challenges faced by under-represented groups in the industry. The next step was to encourage members and the industry to take meaningful action within their organisations.