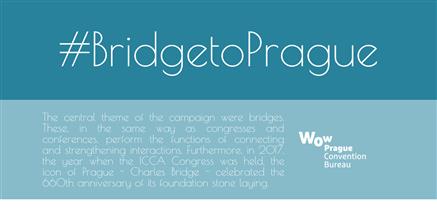 The Bridge to Prague year-long campaign was launched by the Prague Convention Bureau and ICCA in November 2016 aiming to introduce Congress Prague to the meetings industry experts who were considering attending the 56th ICCA Congress. It was held in Prague from 12 to 15 November 2017. The central theme of the campaign, which included both online and print media communication and social media, were bridges. These, in the same way as congresses and conferences, perform the functions of connecting and strengthening interactions. Furthermore, in 2017, the year when the ICCA Congress was held, the icon of Prague - Charles Bridge - celebrated the 660th anniversary of its foundation stone laying.
Since the launch of the campaign, a total of 298 articles informing about the 56th ICCA Congress were published in the media, worth more than 475,000 Euros. The Congress’s official website recorded almost 31,000 visits from over 14,000 unique visitors spending an average time of 2.3 minutes on the web in the busiest period between the beginning of August and end of December 2017. ICCA’s Director Marketing Mathijs Vleeming said: “A major challenge for each ICCA Congress destination is to utilise ICCA’s global brand and community to increase its PR profile. Since our 2014 ICCA Congress in Antalya, Turkey, ICCA has used a “Roadto…” hashtag to build momentum amongst our members and promote our upcoming Congress on social media. The #BridgetoPrague hashtag was a very nice twist on this. Moreover, the Bridge to Prague campaign took this tradition to another level as “building bridges” developed into the theme of the Congress. … I think Prague CVB did a great job leveraging the opportunity the ICCA Congress provided!”www.pragueconvention.cz