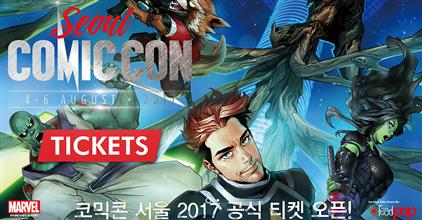 A whirlwind of cosplay, comics, movies, and games will be taking Coex by storm from August 4th to 6th 2017 with the launch of the first Comic Con Seoul. Organized by ReedPOP, Comic Con is world-renowned brand that showcases the latest pop culture trends including comics, movies, video games, cosplay, anime, and more. Comic Con Seoul will continue a tradition of exciting programs including the Korea Championships of Cosplay, celebrity meet and greet events, and specialized content for comics, video games, and movies. Other features include the Comic Con Seoul Artist Alley where visitors can interact with creative writers, illustrators, and designers; demo sessions by professional artists; classroom sessions and behind-the-scenes panels featuring rare looks into films and popular game productions; and engaging, in-depth question and answer sessions with celebrities. Past ReedPOP Comic Cons have hosted an all-star list of celebrity guests including the likes of George Clooney, Chris Evans, Sigourney Weaver, and the cast of The Walking Dead.

“We’re incredibly excited to be a part of bringing an event with such a prestigious reputation as Comic Con to Seoul,” said Bo-Kyung Byun, President and CEO of Coex. “As we are located in Gangnam, at the heart of Korean pop-culture, we believe this will truly be one of the year’s greatest events at Coex an d expect a huge turnout.” (fun)