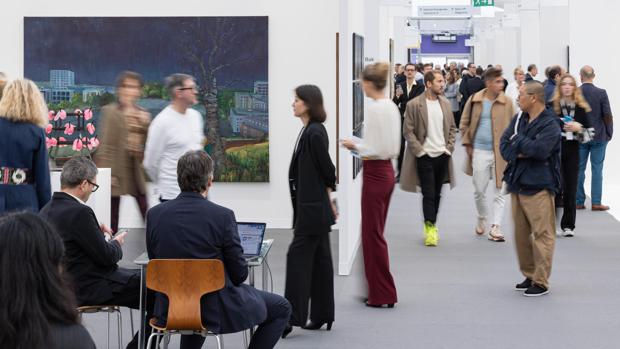 The inaugural edition of Paris+ par Art Basel brought together 156 premier galleries from 30 countries and territories – including 61 exhibitors with spaces in France – in a new flagship event that further amplifies Paris's international standing as a cultural capital.


A strong line-up of galleries from France was joined by exhibitors from across Europe, Africa, Asia, North and South America and the Middle East for a global showcase of the highest quality. Reaching beyond the Grand Palais Éphémère, the fair presented an active cultural programme from morning to night, all week, and throughout the city, through a robust programme of collaborations with Paris's cultural institutions and its city-wide sector sites.
„We couldn't have hoped for a better debut in this amazing city.“
Marc Spiegler, global director, Art Basel
The debut edition was attended by leading private collectors from France and across Europe, the Americas, the Middle East, Asia and Africa, as well as museum directors, curators, and high-level patrons from approximately 140 cultural organisations."

Clément Delépine, director of Paris+ par Art Basel, said: "The excitement in the halls and throughout Paris is testament to the city's renewed momentum and the spirit of collegiality which has made the extraordinary success of this first edition possible." "This is a truly historic moment for Art Basel", said Marc Spiegler, global director, Art Basel. "We couldn't have hoped for a better debut in this amazing city."