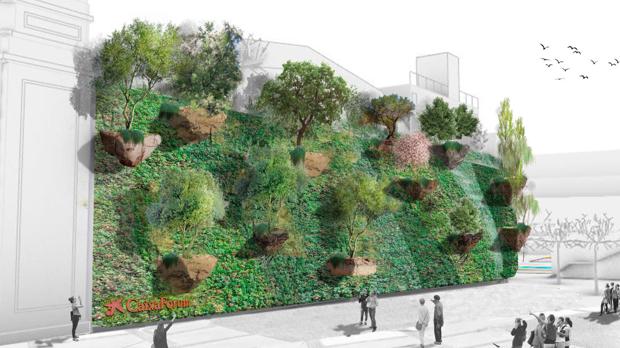 Fira de Barcelona is going visibly greener: The façade of hall 8 in the Montjuïc venue, located in on Avinguda Francesc i Guàrdia, will become a vertical forest featuring 15 large suspended trees and 22,000 plants of 40 different species in December 2022.


The project aims to unite nature. The installation of the vertical forest, which will revolve around the concept of roots, is a pioneering initiative of the "la Caixa" Foundation, in collaboration with the City Council and Fira de Barcelona, to commemorate the 20th anniversary of CaixaForum Barcelona. With a surface area of over 500 m2 and a height of 12 metres, this project will transform the façade into a large green area, covering the wall that was left uncovered after the demolition of the former La Pèrgola restaurant in 2014.
„The project aims to connect the mountain of Montjuïc with the city “
Fira de Barcelona
The trees will be installed on a steel structure with a vertical gardening system capable of collecting and using rainwater and irrigation water to optimise natural resources and reduce water consumption. The project aims to connect the mountain of Montjuïc with the city, bring the world of plants closer to the public from a perspective never seen before and serve as a refuge for birds and other pollinators that are beneficial to the planet.