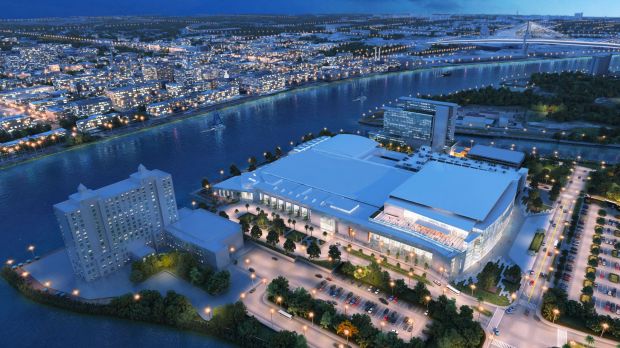 The groundbreaking ceremony for the new Savannah Convention Center (SCC) expansion took place on March 17, 2021. The $271 million expansion will double the SCC's exhibit hall space to 200,000 square feet, add a 58-foot-wide hangar door, a 40,000-square-foot ballroom, 15 additional meeting rooms, and a 900-space parking garage. The project will enable Savannah to contend for larger conventions and events, driving significant economic growth for the city, Chatham County, and the state of Georgia. The project's delivery will also serve as a boon to the local economy and is anticipated to create as many as 600 construction jobs over the next 27 months.

The ground-breaking marks a pivotal milestone in the project's history, which began in 2017, when the Georgia General Assembly first approved the initial funding to begin design efforts in concert with Atlanta-based Thompson, Ventulett, Stainback & Associates (tvsdesign) and Savannah-based Hanson Architects – the two firms that designed the original Convention Center. The first preconstruction work on the project through Clark began in October 2018.

"Clark Construction was selected for this project because of their experience in constructing conventions centres all over the United States," said Marvin Woodward, deputy executive director of Georgia State Financing, and Investment Commission's (GSFIC) construction division. "We certainly look forward to working with them on this major project."