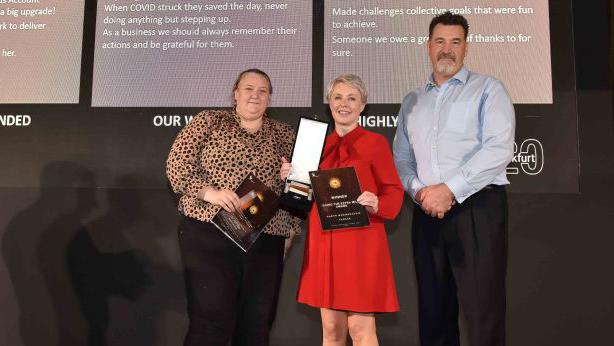 It was every organiser's nightmare scenario. With only hours until Messe Frankfurt Middle East was due to receive venue handover for Intersec Dubai, one of Messe Frankfurt Middle East's flagship shows and first large-scale event since lockdown, the unthinkable happened. Symptom-free group operations director Jamie Macdonald received a positive result and had to quarantine, preventing him from physically attending the build-up and event. The team was primed to start build-up for 522 exhibitors to welcome 18,000 visitors to Dubai World Trade Centre. To reduce the COVID risk, the entire operations team had prepared by isolating for three weeks and, as an added precaution, all undertook PCR tests before attending the site. While all were expecting the necessary reassurance of negative results, this was not what transpired. This nightmare situation was exacerbated due to the relative inexperience of the remaining team, including many working on the multifaceted event for the first time.

„In my 30 years of experience, I've never done anything like this before.“
Simon Mellor CEO Frankfurt Middle East
Without a moment to spare, at around 9:00pm, Messe Frankfurt Middle East's CEO Simon Mellor reached out to Tarsus managing director Tim Hawes, explaining his predicament. "In my 30 years of experience, I've never done anything like this before. It was a highly unusual request to Tarsus, but luckily Tim was very empathetic. I dread to imagine what could have happened if he had not been", Mellor said. "When Simon explained the situation and requested that Tarsus team members came to his aid, I was happy we were able to help another event organiser in such a position", Hawes explained. Demonstrating his understanding not only of the importance of the situation, but also the urgency of the request, Hawes suggested that two of his team members would be able to assist. Caryn McConnachie and Sarah Dunne rushed to the venue and began overseeing the influx of more than 400 contractors. As a result of their quick actions, in tandem with remote contact with Macdonald, Intersec Dubai 2022 was ready for its opening on the morning of January 16 as planned. So, at Messe Frankfurt Middle East's Staff and Supplier Awards recently, there was a clear winner for the "Going the Extra Mile" category for 2022: Tarsus - in appreciation of their support.