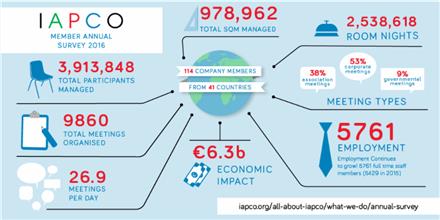 Designed to publicise good news for IAPCO members on Global Meetings Industry Day, an IAPCO infographic highlighted the fact that employment figures have recovered to an all-time high after the financial crash of 2008, with 5,761 full time staff members, compared to 5,429 in 2015. Launched under the hashtag #GMID17, the IAPCO twitter feed received over 16,000 impressions in the first 24 hours.The infographic highlights the IAPCO membership, which now numbers 114 company members from 41 countries. Within this network, the infographic reveals that IAPCO members were responsible for nearly 27 meetings a day, with an equally staggering total of 3,913,848 participants managed across 978,962 square metres of floor space. Perhaps even more significant is the economic impact: IAPCO members are estimated to have generated around €6.3 billion, an enormous figure which shows the global impact of the meetings industry.