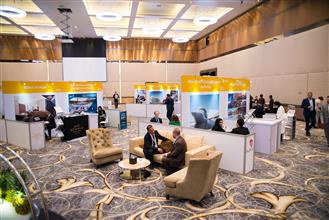 Ibtm Arabia 2018 has seen an influx of high-profile international Hosted Buyers already confirmed to attend, following the introduction of its enhanced Hosted Buyer programme, adopted across IBTM’s portfolio. The programme sees the Ibtm team pre-selecting and qualifying Hosted Buyers, allowing them to be fast-tracked through the process. This also enables Ibtm to be even more targeted in ensuring only the highest calibre of Hosted Buyers are present at the event.
Hosted Buyers already confirmed to attend IBTM Arabia include representatives from international organisations such as AIM Group International, ALJ – Toyota, American Express Travel Services, Bayer Pharmaceuticals, Continental AG, Danone, Firmenich, GSK and United Spirits Ltd. Shinu Pillai, Exhibition Manager, Ibtm Arabia, comments: “Testament to the event’s importance and the weight it carries in the Middle East MICE market, IBTM Arabia attracts overseas suppliers from across the globe. Streamlining the Hosted Buyer process means added value for exhibitors, by targeting buyers matched according to exhibitor needs, as well as ensuring we make our Hosted Buyers’ time as productive as possible at the event, by helping them meet with people with whom they are most likely to do business.” Ibtm Arabia attracts elite attendees from more than 30 countries each year, with more than 2,100 pre-planned meetings happening during the 2017 event. IBTM Arabia will take place at Jumeirah at Etihad Towers in Abu Dhabi, United Arab Emirates, from 5-7 February. www.ibtmevents.com
tags:
Ibtm Arabia