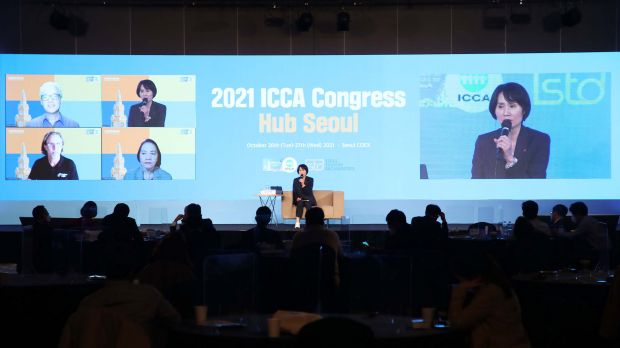 Seoul also provided local program in accordance to the overseas program broadcasted on the main screen for the members of Korea gathered at COEX. A hologram performance under the main message of the Congress, 'Forward to Future', opened the main program of Seoul and followed with a keynote speech of '2022 Korean Trends and New Normal Convention Strategy’.

The role of Kim Jihyun, Director of the Seoul Tourism Organization, during the Congress illustrated the advantage of a hybrid event representatively as she participated in a panel discussion of Asia Pacific region in the morning and converted into one of the three moderators in the afternoon.

Lectures were broadcasted to all hubs before each panel discussion to broaden knowledge as exchanges of in-depth thoughts and opinions on the same topic were followed. Seoul did not waste the chance to spread the important global movements of the industry and promoted panelists from different sectors in the industry to enrich the on-site contents while ensuring smooth online traffic.

In addition, successful attraction of World Congress of Neurology (WCN) 2025 is to invite about 5,000 participants to Seoul in 2025 followed by 1,000 entering for World Congress of Audiology 2026 the year after. Seoul is making steady steps moving further and accumulating experiences of hosting different types of international hybrid events.

By the time these events are hosted, Seoul will be prepared to arrange the environment for the best hybrid events possible. It was shown that the global MICE industry acknowledges the importance of destinations being hybrid when the Hybrid City Alliance won the Best Marketing Award at 2021 ICCA Congress. The Seoul Convention Bureau contributed to the success as the first member from Asia, Seoul’s effort in searching for the best balance will deliver optimum harmonization example coordinating online and on-site events seamlessly.