In 2017 EMECA celebrates its 25th Anniversary 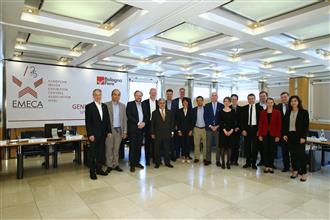 The General Assembly of EMECA, the European Major Exhibitions Centres Association, including 22 out of the most important European fairgrounds, took place in Bologna on 12 and 13 October 2017. It is an important moment of exchange at which the members discuss the main economic data, the crucial aspects, the main strengths and weaknesses and challenges.
„The European trade fairs industry faces three main challenges today: firstly, digitization of the economy, secondly responding to the very diverging economic development in different economic regions in the world and thirdly the changes in political and security circumstances. We are willing to take responsibility and to contribute to improving the framework conditions by representing the interests of the European trade fair organisations and making their voice heard”, states Claude Membrez, EMECA President. www.emeca.eu
tags:
Bologna