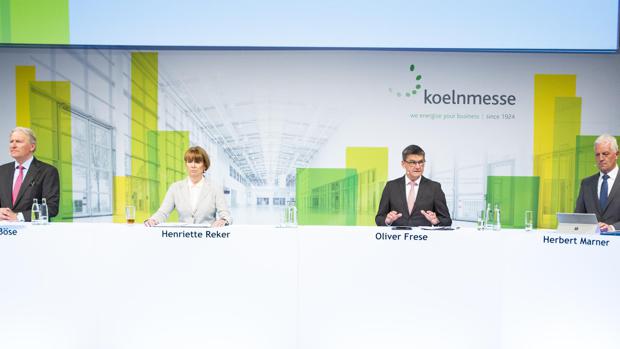 Koelnmesse concluded its second year of the pandemic with a "clear loss, but a respectable result under the circumstances," according to the chairwoman of the supervisory board, Cologne's mayor Henriette Reker, at the annual press conference.


35 of the 68 events planned worldwide could take place in 2021 - many with a good level of success, but in some cases with significantly reduced participation. The 134.2 million-euro turnover and limitation of the loss to 81.4 million euro in 2021 are primarily due to the initial trade fair relaunches last fall, implementation of the Cologne vaccination centre, but also to significant cost-cutting measures as well as short-time work until September. Equity remains sufficient at over 180 million euro - thanks to the volume of more than 250 million euro at the start of the pandemic and the equity increase of 120 million euro by the shareholders in 2021.
„We have to find the right path between hope and realism.“
Gerald Böse, president and CEO, Koelnmesse
For 2022, despite the promising re-start, Koelnmesse is prepared for further significant losses. Gerald Böse: "We have to find the right path between newfound hope and the required realism. Short- and medium-term forecasts are hardly possible in view of ever-changing influences against the backdrop of the war in Ukraine as well as the recent effects of the healthcare crisis and the lockdown in China. We will therefore continue to pay strict attention to keeping our costs low, increasing profitability and flexibility, and focusing on new business in Germany and abroad."

After more than 20 years of service to Koelnmesse, long-time chief financial officer Herbert Marner retired at the end of May 2022. Gerald Böse, who has extended his contract as president and chief executive officer until 2028, and Oliver Frese, chief  operating officer, have been leading the company as a two-member management team since June 1, 2022. Volker Ahrberg, vice president Finance and Controlling, is responsible for financial issues as an authorised signatory for Koelnmesse.