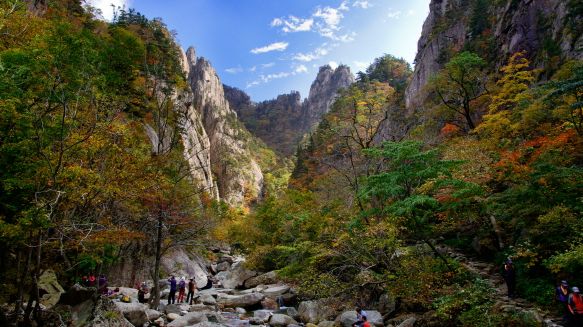 Seoraksan Mountain in Gangwon Province, one of many natural landmarks in this province of Korea.


Plans are underway for the construction of a new international convention centre in Chuncheon, Gangwon Province, the first international convention centre in the province. Comprising the northeast region of the Korean peninsula, Gangwon Province is recognised for its rich natural retreats and includes the major cities Gangneung, Chuncheon, and Pyeongchang. A popular destination for outdoor sports and recreation, the province hosted the 2018 PyeongChang Winter Olympics, demonstrating its capability to host large-scale international events.
Top Korea MICE regions are:
Seoul, Gyeonggi and Busan, all of which currently operate large-scale convention centres – COEX (Seoul), KINTEX (Gyeonggi), and BEXCO (Busan). Gangwon Province anticipates that construction of its first international convention centre will provide the boost it needs to place itself amongst the top three.
The hosting of the games further enhanced the province's MICE hosting capabilities, including the extension of a KTX (high-speed bullet train) line connecting major cities within the province to Seoul in under two hours. According to preliminary plans, the new convention centre is expected to have a site area of 54,200 m2, a total building area of 16,200 m2, and a total floor area of 36,900 m2. The total cost of the project is estimated at 149 billion won. The convention centre will be built on Hajungdo Island in Chuncheon, which is also home to the new Legoland theme park, currently under construction with a tentative opening date set for 2022. The theme park will be the 10th Legoland in the world and the first in Korea.