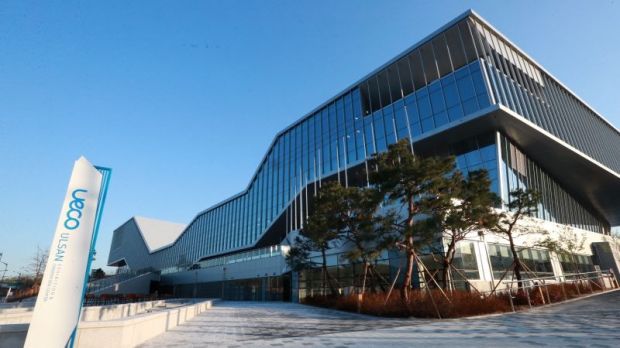 Korea unveiled its newest convention centre, Ulsan Exhibition and Convention Center (UECO), on April 29, 2021. UECO is the 17th convention centre in Korea, anticipated to turn the south-eastern Metropolitan City of Ulsan into the next hub for the Korean MICE industry. Located between Gyeongju and Busan, Ulsan is Korea's eighth largest city with a population of over 1.1 million, recognised as the industrial powerhouse of South Korea, home to the largest automobile assembly plant and shipyard.

As one of Korea's major cities, construction of an exhibition and convention centre in the area was first promoted back in 2000, but halted due to controversy over budget and scale. The project finally saw light with the opening of KTX Ulsan Station in 2010, and construction officially began in 2017.

With an exterior design inspired by the whale-shaped carving on the Bangudae petroglyph (National Treasure No. 285) in Ulju-gun, Ulsan, one of the city's main landmarks, UECO boasts a total area of 43,000 m2, with three floors above ground and one floor underground. On the first floor is the Exhibition Hall with a total area of 8,000 m2, divisible into four separate halls or combined into larger halls depending on the size of the event. The Convention Hall is located on the third floor, divisible into three halls or able to be combined into larger spaces, with a total of 1,336 m2. A total of 12 meeting rooms in varying sizes are located throughout the centre as well, to accommodate smaller meetings.