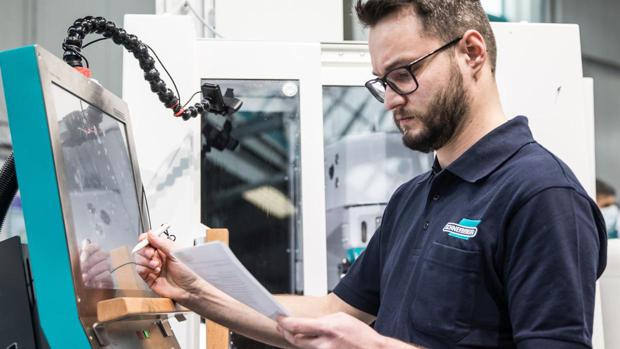 Private exhibition organiser Afag, Nuremberg, has divested itself of GrindTec: The international trade fair for grinding technology founded in 1998 is now part of the portfolio of Leipziger Messe. The ailing trade fair brand, which had been staged in Augsburg, will be reissued in Leipzig with a new improved concept.


The discontent expressed by GrindTec exhibitors triggered the VDW (German Machine Tool Builders' Association) to launch the new grinding technology fair Grindinghub in collaboration with Messe Stuttgart. They even had the event endorsed by Swissmem (Association of Swiss Mechanical and Electrical Engineering Industries). The rival fair premiered from May 17 to 20, and with 370 exhibiting companies and 18,000 guests, achieved a very respectable result.
„We were very happy to restart GrindTec in Leipzig.“
Markus Geisenberger, managing director, Leipziger Messe
Leipziger Messe now wants to further develop the former Afag showcase event under the caption "by users for users". The FDPW (Precision Toolmakers' Association), as one of its joint founders, remains responsible for the event's concept and programme. In this capacity, the association has revised the content profile of GrindTec. The trade fair will switch to odd years and from 2023 will be staged alongside the twin exhibitions Intec and Z. The Leipzig exhibition company sees this format as an "ideal framework" for "synergy effects" for exhibiting companies and trade visitors – and envisages further growth for the combination.

"We were very happy to restart GrindTec in Leipzig. It was great news, since GrindTec, with its emphasis on tool processing and grinding, fits in perfectly with our international trade fairs Intec and Z. Since its first edition in 1998, GrindTec has grown considerably. We want to continue along this successful path together with the FDPW", says Markus Geisenberger, managing director of Leipziger Messe.