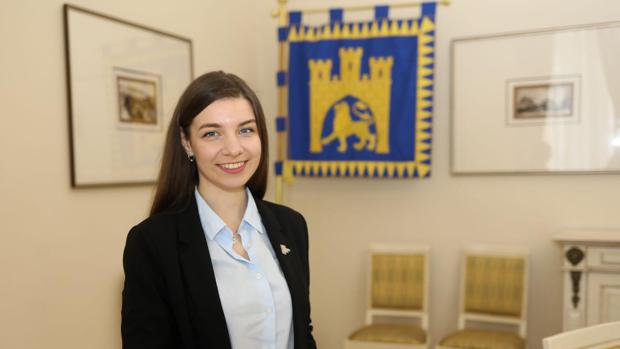 Sofiya Kayinska is Acting Director of the Lviv Convention Bureau in Ukraine.


Sofiya Kayinska is Acting Director of the Lviv Convention Bureau in Ukraine, located 70 km east of Poland. She talks about the war in Ukraine and the will for freedom, the situation in convention cities like Lviv, Kyiv and Odesa and how the events industry can help.

tw tagungswirtschaft: Sofiya, how are you?
Sofiya Kayinska: We feel relatively safe in Lviv. It is very difficult to understand that we live in a parallel reality – the world is recovering after the pandemic and the meetings industry is trying to get back to normal. Only on 18 February we wanted to launch our support package for conferences to be held in Ukraine in 2022 and my only concern was that it would be successful, but then Putin started a war of aggression in Ukraine on 24 February. People are killed, shelled, the cities are destroyed by the Russian army … On the first days of the war, I decided that our focus is now on informing the world about our situation and how the world can support us. And of course, hoping for the best. We are planning to host events after the war.

So, how can we help? How can the events industry support you?
Right now: Please cancel all business with Russia. All the events, all products, all services that they provide, for example music, apps, PCO services, etc.. Suspend and cancel their membership in official organizations and associations. Urge your governments to make harsh decisions. We can see thousands of people taking to the streets and demonstrating. We are thankful for that. I think, it will also be effective when institutions write official letters demanding to support Ukraine with actions, with weapons and fighter jets. If this help is not provided by the decision makers, more countries will be under attack like Poland, Latvia, Lithuania, Estonia: Russia does not recognize any borders. After Ukraine wins, we will be happy to host meetings in Lviv, Kyiv, Odesa, and in other cities. Please support us! For congresses that rotate, please choose your Ukrainian partners, support their bids and hold meetings in Ukraine. Some of us do not have the opportunity to visit international trainings, but we are eager to learn. Please grant us reduced participation fees and scholarships.
„Please cancel all business with Russia!“
Sofiya Kayinska, Acting Director of the Lviv Convention Bureau
People in the European Union are impressed by the Ukrainians' fight for their country and our democracy in Europe. Where do you get the strength from?
It is a kind of magic bond in our DNA that unites Ukrainians. We may have different points of view, but when it comes to our freedom – everyone is united. Just have a look at our history: 1990: Granite revolution, 2004: Orange Revolution, 2013: Revolution of Dignity. During all this time we are against the course of our government to agree to play according to Russian rules. We know that this is not how we want to live. We are not a colony, but a proud and independent country with democratic views! Humor is also our strong side to keep the head clear. We are inspired by our armed forces and territory defense, by our volunteers and strong leaders.

Lviv is located in the west of Ukraine. What is the situation like?
We feel relatively safe on the west. The city became a hub for humanitarian help. Helpers gather here and disperse later to cities in need. It is a meeting point for volunteers, the place for diplomatic missions and international journalists, and of course it is a temporary home for temporarily displaced persons. Some of them stay for a few days and think about going to the region or abroad, some of them think about starting a life in Lviv. Business from the east tries to continue to work on the west. We know that we need to build relationships and communication now, so that we can have the result later.

What is the situation like in the rest of the Ukraine, in convention cities like Kyiv, Odesa and Mariupol?
Kyiv is still standing and fighting. It is the capital of Ukraine, or, as we say, a capital of freedom. People live even in the subway stations because these are among the safest places in the city. Two cities Bucha and Irpin were also suffering a lot. These days Russians retreated from these cities and we saw horrible photos – the result of their stay. Dead bodies of the civilians on the streets, burnt and destroyed infrastructure ... Unimaginable pain. Odesa is fighting for itself even though it is attacked from the sea. I hope you will have a chance to see the beauty of this city, as well as the beauty of Lviv. Mariupol is completely destroyed. It will take many years before the city is cleared of bombs and rebuilt. With no humanitarian help and green corridors Russian army took lives of many people. They do not care who they kill, whether it is a child a woman or a soldier.
„Lviv became a hub for humanitarian help.“
Sofiya Kayinska, Acting Director of the Lviv Convention Bureau
Are you in touch with your colleagues at the Kyiv Convention Bureau? What do they tell you about their situation and infrastructure?
We are not in touch with Kyiv Convention Bureau, but we do stay in touch with the State Agency for Tourism Development of Ukraine. Of course, Kyiv is under attack. Hopefully the infrastructure will be rebuilt soon, and Kyiv will be ready to host events after Ukraine wins.

What does your (working) day look like?
From the beginning of the war, I have joined the team of the Lviv Tourism Office where we launched the Lviv Media Center which later became the Ukraine Media Center. For a month half of my day was about helping journalists from over the world, the other half was about connecting with our international colleagues from the industry, writing official letters and organizing the work of a convention bureau. Now I am getting back to my main modified mission, but it is still a challenge for me to start writing bids again – many people are volunteering, curing people – it seems that is not the time for conventions in Ukraine … But it one of the peculiarities of our industry that events have lead times of two to three years. It is scary to write about things that can be destroyed any minute. It overwhelms me to see and read about the support of the world. I am proud to be Ukrainian and share knowledge about Lviv and about Ukraine. The Lviv Convention Bureau team continue preparing information about current situation and planning the future.

On 22 February 2022, just two days before Russia invaded Ukraine the Lviv Convention Bureau published the news "What should I do in an emergency situation?" A coincidence?
Our European partners and Ukrainian government warned about the situation which was getting more and more tense and that Russian troops were getting closer to Ukraine – as Russia has already occupied Crimea in 2014, and Donetsk and Luhansk. Then the diplomats moved from Kyiv to Lviv. Two weeks before the war Lviv started to prepare shelters, checked alarm systems, passed the first aid courses and some of us had shooting exercises. There was also an information on how to prepare the emergency bag. Some people took it seriously and prepared for the war, some prepared on the first day of war with the sound of the sirens. What we did not expect was a full-scale war, missiles above our heads all over Ukraine, blocked cities without humanitarian help, killed civilians, shelled maternity hospitals … Even in Lviv we can have three to four air alarms a day. We don’t know where the missiles will go down and what damage they will cause. Two missiles hit the oil station and the plant these days in Lviv. Fortunately, nobody died. Kerstin Wünsch
Lviv Convention Bureau
The official convention bureau of Lviv was created to promote conference opportunities and support companies and associations in holding conference and corporate events. The team provides free and independent expert support in planning and preparing business events in Lviv and helps meeting planners to choose partners thanks to a wide network of contacts between the local community, authorities and governments. The Lviv Convention Bureau is a member of the ICCA - International Convention and Congress Association and belongs to the Central European Chaper. https://www.lvivconvention.com.ua/en/