Manifest on the Future of DMOs 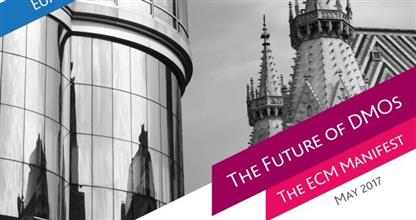 European Cities Marketing (ECM) is to launch the first Manifest on DMOs' future. The report will look at the daily change and disruption occurring in European tourism; it sets out a vision on how Destination Marketing Organisations (DMOs) can empower to take on a leading role in city marketing and management. This first ECM Manifest will be launched during the ECM International Conference in Dubrovnik, May 31 - June 3, 2017. After turbulence caused by terrorism, political shocks and major shifts in consumer travel behaviour, Marketing professionals attending this year's European Cities Marketing (ECM) International Conference from across Europe and overseas will have one thing on their minds: disruption has become the new normal. As most destination marketing organisations are still operated along traditional lines under the direction of local government, reacting rapidly to support tourism partners through these changes can be highly challenging.

This vision will be visible through a new paper titled The Future of DMOs: The ECM Manifest which will be presented in the opening session of the ECM International Conference, and distributed online from the start of the event.

ECM President Ignasi de Delàs: "Throughout Europe, DMOs are facing similar demands to re-think what they do.  Budget cuts, political pressure and shifts in consumer behaviour mean that it's time for DMOs to find a new, strengthened role in attracting all types of talent, ideas and investment for their cities, regions and nations."