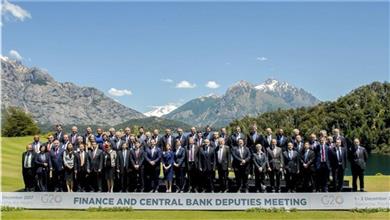 Messe Frankfurt Argentina and MCI Group have been assigned to organize a major project in congress business: In 2018 -and for the first time ever- Argentina will host the G20, the foremost international meeting between heads of states, finance ministers and central bank governors from the world's leading economies. Indexport Messe Frankfurt S.A., a subsidiary of Messe Frankfurt GmbH, together with MCI Group in Argentina (Congresos Internacionales S.A.), were chosen to organize the G20, which includes more than 40 preparatory meetings before the summit that will take place at the end of 2018 in Buenos Aires. The companies join forces for this prestigious international event, to be hosted for the first time in Latin America.

Mr. Detlef Braun, Member of the Executive Board of Messe Frankfurt, said: “We are extremely proud that Messe Frankfurt and our affiliate in Argentina have been chosen to be the preferred partners to organize the G20. This is another credential that values the excellence of our activities and our network in Argentina and South America.”
Adding to these comments, Mr. Richard Torriani, COO MCI Group – Americas, stated: “MCI believes that ‘when people come together, magic happens’. In this case, the close partnership of MCI Group and Messe Frankfurt Argentina combined with the knowledge and operational excellence of our local affiliates creates a magical partnership to help promote and organize the G20 in Buenos Aires”.
Indexport Messe Frankfurt and MCI joined forces to bid for the G20 and won this prestigious project after undergoing a strict selection process under the legal status of Transitory Union of Companies (UT) that regulates joint ventures in Argentina.