Over $500 million in economic benefit for the city of Toronto 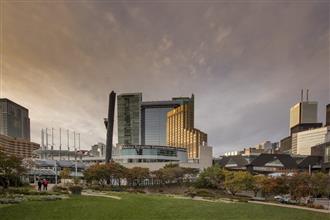 The Metro Toronto Convention Centre (MTCC) is celebrating a very successful 2016/17 fiscal year by confirming that it hosted 569 events and generated over $500 million for the City of Toronto and the Province of Ontario in total direct spending economic impact from April 2016 to April 2017.

Based on the Ontario Tourism Regional Economic Impact Model (TREIM), the MTCC also sustained 5,749 jobs in the city and generated $163 million in taxes. As well, the Centre confirmed a total of 13 citywide conventions for future years last fiscal year, 11 from the United States. This represents the highest number of major convention wins from the United States within one fiscal year in more than a decade. It was also a record year for the MTCC’s gross revenue, which totaled $65 million. Looking forward to fiscal year 2017/18, Canada’s leading convention and trade show facility projects a record-breaking summer hosting an unprecedented eight international and U.S. citywide conventions from June to September 2017 such as Hospitality Industry Technology Exposition & Conference (HITEC) Toronto 2017 from June 27-29 and Enterprise World 2017 (Open Text Corporation) from July 11-14. These citywide conventions will gather worldwide thought leaders across a variety of subjects including law, midwifery, sports medicine, and education. A complete list is below. “We are thrilled that our strong 2016/17 fiscal year generated significant economic benefit for the City of Toronto and the Province of Ontario as we remain committed to making a positive impact in our community”, said Barry Smith, President and CEO of the Metro Toronto Convention Centre. “We look forward to building on our achievements and creating new successful events for attendees from around the world in fiscal year 2017/18.” The Metro Toronto Convention Centre is Canada’s number one convention and trade show facility. Over the past 33 years, the Centre has hosted over 20,000 events and has added $5.8 billion in direct spending economic impact to the community. (wün)www.mtccc.com