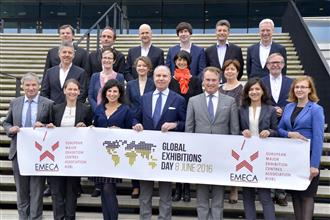 The second edition of the “Exhibition Industry EU Dialogue” organised on 21st February 2018 by the European Exhibition Industry Alliance (EEIA) in Brussels was again a success. Over 50 participants from all over Europe gathered for a day of policy insights, open discussions, advocacy work and political networking.   Claude Membrez (CEO Palexpo and EMECA President), Gerald Böse (CEO Koelnmesse and UFI European Chapter Chair) and David Boon (General Manager Brussels Expo, EMECA Vice President EU Relations and UFI European Chapter Vice Chair) welcomed the participants and speakers:  “Open markets are the motor of our industry, therefore we are delighted to discuss the news and challenges in this specific matter in the trade part of this conference”, said Claude Membrez. Gerald Böse stressed that “The exhibition industry has a strong innovation power and aims to use data in an intelligent way. We look forward to learning about the Commissions next projects in the digital field.” David Boon called attention to the socio-economic impact of the exhibition industry: “Trade fairs increase productivity, jobs, growth and infrastructure in many regions in Europe.”   Member of the European Parliament and former Prime Minister of Slovenia Alojz Peterle opened the first part of the event with a general picture of the current state of the EU, its internal and external challenges and a personal outlook to the 2019 European elections. He mentioned the growing attitudes and values gap between Eastern and Western EU Members States, the currently unbalanced Franco-German motor of the EU, migration and the Western Balkan question and the desire to revitalize the spirit of Europe, to strengthen and unite Europe more. This year, the event was organised by EEIA in partnership with AUMA, AEFI, CFI, Febelux and IFES. These and many other EMECA and UFI members collaborated in the event organisation and speaker identification. www.exhibition-alliance.eu