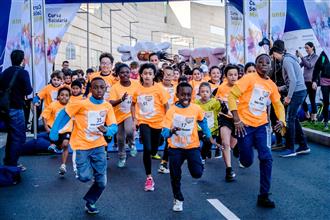 On March 11 the Palma Convention Center was once again the starting point for the second edition of the race promoted by the Rafa Nadal Foundation, which was attended by more than 350 runners. Under the name of Millor Junts (Better Together), the race had two protagonists: sports and solidarity. The money raised by the event has gone to the Rafa Nadal Foundation Centre, which helps socially vulnerable children and youngsters in Palma. Meliá Hotels International – managing company of the Convention Center - is the main sponsor of the race, which has joined the Rafa Nadal Foundation in this solidary sport event to help revitalize the neighborhoods of Nou Llevant and La Soledat, two particularly disadvantaged areas of the city. The race went through these two districts, with the Convention as the starting point, while the finishing line was located at the Rafa Nadal Foundation Center, which was also equipped with children's games and activities to accompany the race. There were three different routes of 7 km, 3 km and 750m, allowing people of all ages and abilities to take part. In addition, this year there was also a Nordic walking race.