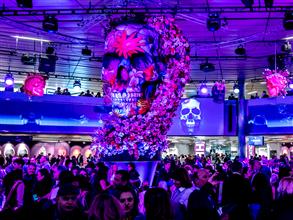 The European Congress of Radiology (ECR) in Vienna saw record attendance in 2017. This despite the fact that all its content was broadcast live via the internet, or perhaps because? 26,829 participants – of which around 5,700 purely online – at the European Congress of Radiology (ECR) held between 1 and 5 March 2017 at the Austria Center Vienna was a record for the European Society of Radiology (ESR) organising the event. “2017 was the most successful congress we have ever held”, said Konrad Friedrich, Head of Department Conference Management & Marketing of ESR. Friedrich is responsible for implementing the congress with a team of three. “We are the contacts for organisation and coordination, but actually over a hundred people are involved.” The congress was a success not only from the participants’ perspective. A total of 6,757 abstracts were submitted for 2017, equivalent to an increase of almost 23 per cent on 2016. In addition to concentrating on a high level of quality of scientific content, the main focus of the 29th ECR however was on the increasing number of Generation Y participants. Average visitor age is now 41.5. “This success is the result of our Invest in the Youth programme, which we launched at the beginning of the 2000s”, explains Friedrich. The programme offers 1,000 young radiologists and radiology technologists in training the opportunity to take part in the congress free of charge – including overnight accommodation costs – after they submit an abstract. “Average visitor age has fallen by eight years since 2010.”