IMEX: Take The Hague home with you 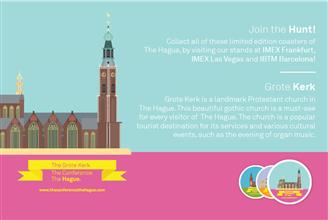 Are you going to IMEX Frankfurt? If so, don’t miss the opportunity to get to know The Hague and the enthusiastic team of The Hague Convention Bureau. This year, the team will welcome you at the brand new Holland Stand E-100 and introduce you to this hidden gem of a city.

Get your set of limited edition coasters of The Hague

Specially for IMEX, The Hague Convention Bureau has designed limited edition coasters with illustrations of some of The Hague’s most famous sites. Next to collecting these exclusive coasters and getting to know more about this amazing city, you will also have the chance to win a surprise prize. In order to win, you only need to share a selfie with someone from the Netherlands and your favourite coaster on Twitter using #IMEXTheHague . The selfie of the most excited coaster owner will be awarded with the prize directly after IMEX Frankfurt.

The Sights. The Hague

Each of the coasters given to Holland Stand visitors portray a special landmark of The Hague. The stunning Peace Palace is home to numerous international institutions that give The Hague its worldwide recognition as the international city of Peace & Justice. The International Court of Justice, the main legal institution of the United Nations, reside in the Peace Palace. The Hague is also known as the royal city. The Noordeinde palace in The Hague is one of the three official palaces of the Dutch royal family. The palace and its picturesque garden are located in the heart of the city. Today, King Willem-Alexander and his staff have their offices in the palace’s elegant rooms. The royal flag is waving on top of the palace when the King is working in The Hague. Finally, the Hague is known for its beautiful architecture and alluring charm. The gothic church, Grote Kerk, is a must-see for every visitor. The church is a popular venue for hosting various cultural events, such as the evening for organ music and is a uniquely memorable venue for hosting corporate events and meetings.

Meet us at the IMEX